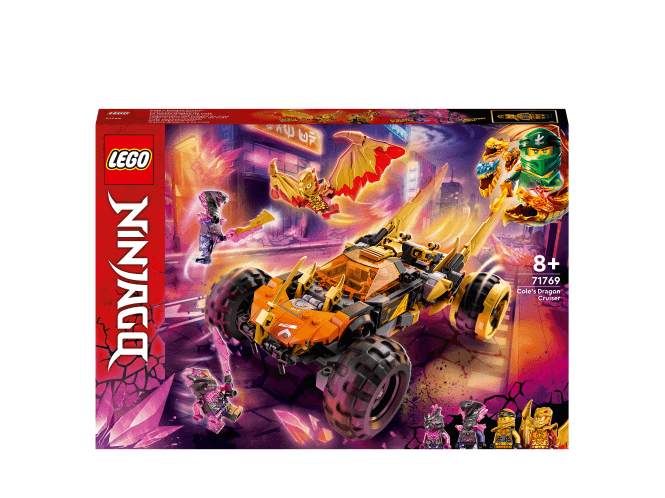 The LEGO NINJAGO car toy features impressive golden lightning blades that can be pushed forward into dragon attack mode, 2 stud shooters, 4 large tires and a passenger and driver seat to place the ninja. The set includes 4 LEGO NINJAGO minifigures: Golden Dragon Kai, with his elemental weapon and golden dragon wings with spikes; Golden Cole; the serpentine General Aspheera, armed with a crystal weapon; and Vengestone Brute with a sword. Little ninja kids launch into an epic battle in Cole’s Dragon Cruiser to win back Kai’s elemental weapon stolen by the evil serpentine General Aspheera. Time for kids to fight the Vengestone Brute and his dangerous crystals by transforming the cruiser into golden dragon attack mode. Can kids stop the ninja’s enemies from turning everyone in NINJAGO City into zombies?

NINJAGO toys transport kids into a thrilling world of fantasy action where they can team up with Cole, Kai, Nya and all the ninja crew to face down a cast of dangerous villains and play out adventures with an extensive collection of playsets including mechs, car toys, dragons and temples.